‘The pandemic will end the age of the office for good.’ Seriously? I doubt it.

A recent article looking at this key question for Comment Central – read it below or here: https://commentcentral.co.uk/the-pandemic-will-end-the-age-of-the-office-for-good-seriously-i-doubt-it/

Hardly a day passes without some ‘authority’ pronouncing the death of the office in the wake of the current pandemic. Carl Henderson, co-founder of Slack, is but one example, commenting that the virus ‘…will permanently affect the way everybody works post-pandemic.’ [Daily Telegraph 3rd Dec 2020 Pandemic will end age of the office for good, says Slack co-founder’]. The ‘death of the office’ is a scenario that favours certain technology companies, Slack included. Having just sold his company to Salesforce for $27.7bn, of which he personally pocketed $750m, some bias on Mr Henderson’s part is understandable. The pandemic has proved a boon for take-up and sales of a variety of office technologies. None more so than video-conferencing. As someone who has spent decades working in offices, I’d like to suggest a counter view i.e., that as vaccination programmes progress, office-based working will make a full return to its pre-pandemic levels.

Every year on or near the 25th of January, an enterprising lady I know hosts a Burns Supper. Not to be defeated, this year she arranged for her guests to join the event via Zoom, even arranging for small individual haggises to be delivered to her guests’ homes. The online celebration was more fun than I’d expected, and had the added advantage of my not having to cross London on a cold January evening to attend. However, everyone present ended the evening saying how much they hoped it would be possible to hold the event in person again in 2022. They meant it too. Out of interest I asked some of the guests later if, given a vote, they’d opt to hold the party in person or via Zoom. Not one of them said they would prefer to videoconference. That was the easy part. Teasing out of them the reasons for their preference was more difficult – eliciting responses like, ‘Well, it’s just not the same is it?’ I agree, but why is it ‘not the same’? Why do people prefer to meet in person?

Psychologists cite the ability to more clearly read a person’s reactions, particularly their body language, as the main reason people prefer face-2-face meetings to videoconferences. This has also been put up as an explanation for the now common complaint of ‘VC fatigue’. I would add audio problems as well. I struggled to catch a single word of Burns’ Ode to the Haggis as a guest sporting a kilt ham-acted a Scottish accent as he recited it. I don’t recall having the same difficulty last year. Video or tele conferencing are acceptable alternatives for certain types of face-2-face meeting, but not for others. Personally, I wouldn’t feel comfortable giving or receiving a performance appraisal, or a similarly sensitive meeting, via video. Doing so would, for want of a better word, feel ‘disrespectful’.

In 1995 Glaxo merged with Wellcome – I was working as a manager in the IT department of the R&D company at the time. When the organisation for the newly formed Glaxo Wellcome plc was unveiled, it surprised many of us because it ‘ignored geography’. It treated, for the first time, the same operations on both sides of the Atlantic as a single organisational unit. The benefit to the new employer was that it made any employee in a role that was duplicated on either side of the Atlantic a candidate for redundancy. When I enquired how this was going to work in practice, the answer I got was that managers with people in both geographies would hold weekly meetings with their reports by switching the meeting venue on alternate weeks. People were less conscious of their carbon footprints at the time! Furthermore, the technology simply wasn’t there in 1995 – the internet was in its infancy, telecoms still had a long way to go and video-conferencing was ‘experimental’. Within just a few weeks, the senior management team (whose meeting burdens and therefore requirement to travel were greatest) complained of feeling constantly jet-lagged and exhausted. The situation was only resolved by fudging another revised organisation that reintroduced some concessions to geography.

A decade later, video-conferencing had become a fact of corporate life. At the same time, the trend towards corporate globalisation continued apace. In 2007 Thomson, a company whose operations were primarily in North America, took over Reuters, a company whose centre of gravity was the UK. I was working for Reuters at the time and got involved in the IT aspects of the merger. One of the first things the new board of Thomson Reuters did was to install Cisco telepresence suites (the ultimate VC solution at the time) in New York and London. The steep cost (circa $100k per conferencing suite) was justified by the anticipated reduction in senior management time spent on executive travel and the associated expense claims. Despite the availability of the Telepresence Suites post-merger, myself and four London-based colleagues supplemented the twice-weekly teleconferences that we held with our new boss in New York with trips across the Pond every Quarter. The boss flew to London to meet us even more frequently. Since then, improvements in bandwidth and multinationals continuing to ‘ignore geography’ has spawned the host of internet-based video conferencing systems – Teams, Zoom, Google Meet and the rest– that we are all familiar with today. These solutions have provided a lifeline to companies and individuals facing the challenge of a global pandemic, but will revert to fulfil their original purpose after it is over.  A poor substitute for face-2-face meetings, they will go back to being used when there is no realistic alternative.

It’s not only the quality of communication that benefits from having people in the workplace – it’s also the quantity. A lot of business activity is more quickly and efficiently conducted when all, or most, of the participants are able to communicate frequently and with immediacy. All activity within offices is either ‘operational’ – the recurring processes an organisation engages in – or ‘project-based’ – the planned process of change by which an organisation moves its business or service forwards. The workflow and ‘channels’ of Slack are well suited to the teams and subgroups involved in certain operational tasks, but are less appropriate for work that is project-based. As corporations have grown larger through takeovers and globalisation, so too have scale of the projects and programmes they attempt. Such programmes almost always involve a significant IT element, adding complexity – and corporate investments of tens or hundreds of millions of Pounds in projects are now commonplace. With so much riding on their success, large projects have become pressure cookers. It’s not unusual for key members to find themselves routinely working twelve-hour days as well as weekends and national holidays to keep things on track. Under such circumstances, problems with team members’ availability are tolerated only reluctantly.

Anyone who has worked for a consultancy on client projects knows the rule: working from the client’s site is mandatory every Monday through Thursday whilst Fridays are devoted to working from the consultancy employer’s office. One reason given for this is that the client ‘wants to see what they’re paying for’. However, a better reason is that members of the client organisation want and expect to be able to wander up to the consultant’s desk whenever they need to. Projects go better if most of its participants are in the same vicinity and reasonably available to talk. Having to make an appointment every time a question or need for discussion between team members arises impedes good communication. Video conferencing cannot be ad hoc or immediate. Every VC has to be by arrangement with a diary appointment to ensure the participants are: (a) at their desk and (b) on their PC at a particular time in order to run Zoom/Teams/Google Meet.

Senior players on projects are almost always in meetings. Catching one to get a quick authorisation or answer to some question can be difficult, however briefly they are needed. Sometimes the only way to catch them is to hover by their desk. There are no electronic equivalents to ‘hovering’ or simply walking over to someone’s desk. If all of the thousands of brief interactions project team members engage in had to be conducted as VCs, phone calls or teleconferences then project timescales, and with them costs, would extend dramatically. Perhaps my own two decades’ experience running major IT projects for large organisations – or my current role as Director of software vendor Where’s Free Ltd (wheresfree.com) that helps office workers find safe and unoccupied desks and meeting rooms – makes me biased. I simply cannot envisage major projects running successfully from anywhere other than an office. Like many people, there are aspects of office-based work I dislike, the commute being top of the list, but I’m afraid calling the ‘death of the office’ is premature and no more than wishful thinking. 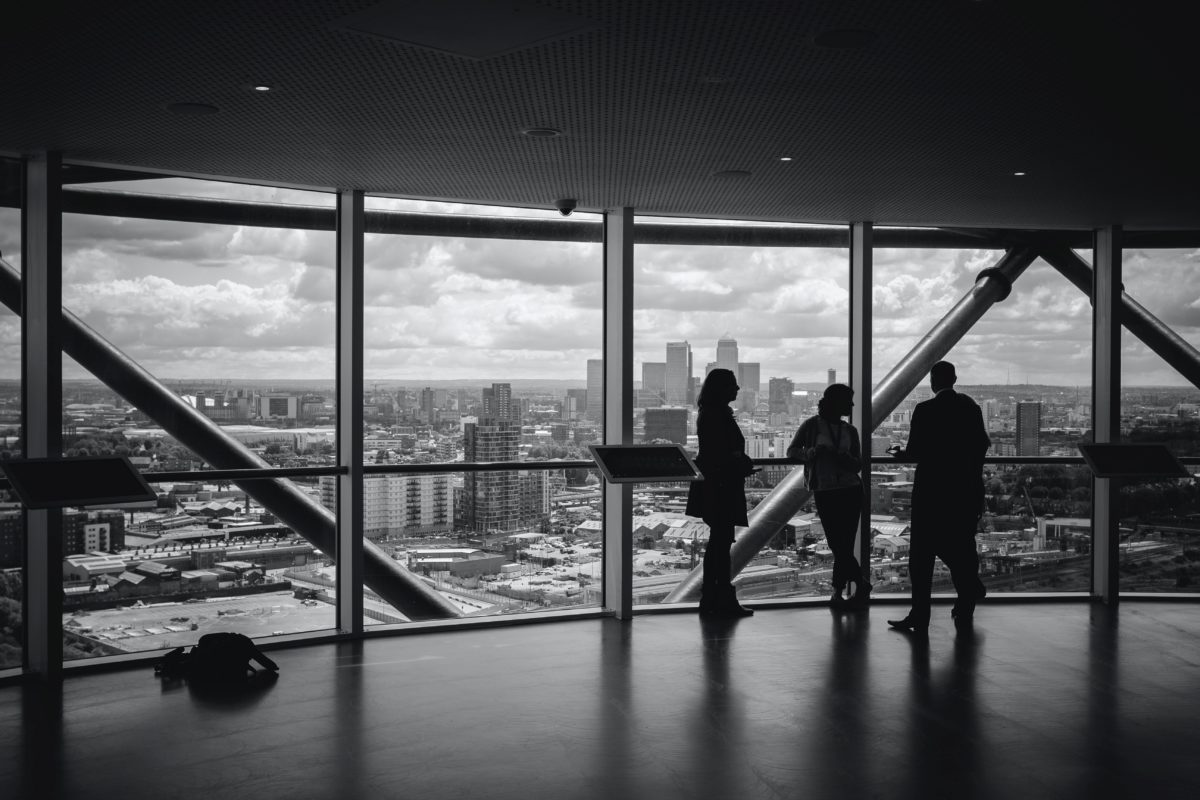